I have to admit that the Microsoft Surface Hub product launch has not exactly been what I would consider flawless execution.  Although I will not pretend to be as smart as all the minds at Microsoft, so maybe this product launch was part of some mastermind marketing genius.

When presenting to audiences who have never seen a Hub and are rather unfamiliar with Skype for Business, I have heard many eventually comment that “This is like my Microsoft Surface Pro” which honestly is not a bad way to think about the device, except some key notable differences.  Let us look into some of the details that make this device unlike any that we have seen in the market to date.

The Surface Hub comes in two size configurations, a single 55” and a single 84” display.  The 84” is really an engineering marvel.  The display is 4K and made from Gorilla glass, which historically had only been seen in small form factors such as mobile phones and tablets.  Microsoft built facilities in Oregon to build these devices and was the first company to build and 84” Gorilla Glass display.  Both displays utilize technology from Perceptive Pixel Inc. which Microsoft acquired in 2011.  The 84” display at that time, without all the additional technology Microsoft has added, retailed for approximately $80,000.  It is quite amazing that the retail price of an 84” Microsoft Surface Hub is now in the $20,000 range.

In addition to the amazing display (I encourage you to see one and watch some 4K content to see how great it is) the Hub has two high definition cameras, which will track the presenter as they move from one side of the screen to the other so that the remote audience always sees the persons face.  It has a four array microphone, speakers and a PC running Windows 10 team edition which is powered by an i7 with 8Gb of RAM and a 128Gb SSD.  The 84” has an upgraded video adapter to drive the 4K content.

The touch and pen experience is like nothing I have personally experienced.  Since the Hub uses a grid overlay it never has to be calibrated and the pens are very quick, accurate and are even sensitive to touch where more pressure creates thicker lines.  During an event where I was presenting on the 84” Hub I had a former automobile designer stop by who was amazed with the experience as he preceded to draw an amazingly detailed drawing of a futuristic automobile.  It was a beautiful drawing which I should have sent a copy of to myself, which is done easy enough with a couple of clicks from the Hub interface.  No longer is there a need for meeting attendees to take a picture of the screen with their mobile phones which can be considered a security risk due to the dissemination of intellectual property even if done unintentionally.  The device comes with two pens but can support three.  The pens are active which means they are powered contributing to the experience. For example, each pen can have a color assigned to it that the user can easily change.  The pens support NFC so you can take a pen from one Hub and by the time you get close to another Hub, the pen has paired itself to the new device.

The Surface Hub was really designed to address wasted time in meetings.  The Windows 10 Team interface allows for a one touch join experience, where meeting attendees simply touch the display to start their meeting when they walk into the room.  There is no fumbling with remotes to turn displays, projectors and other peripherals on. Microsoft has also provided multiple methods to share content via Microsoft’s Mirror Cast, NFC and old school hard wired as another option.  “Write back” is even supported in certain scenarios which allows you to control your device from the screen on the Surface Hub, annotate and mark up documents on your device while working on the Surface Hub and a plethora of other scenarios. 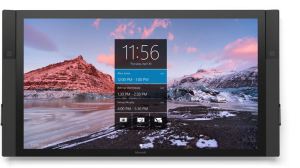 So what is the Microsoft Surface Hub?  It is a purpose built, collaborative end point designed specifically for Skype for Business.  Yes, it does great audio and video but in my opinion, so what?  So does my mobile device.  What sets it apart is that if offers users a great collaborative experience which allows them to create and manipulate content with people in the room or any remote participant who can connect to a meeting on the internet.  That is the Microsoft Surface Hub.